With $5,000 in savings, a $10,000 loan and his home as collateral, Clair H. Reilly, founded Reilly Construction in 1947,” said Bob Reilly, Chairman of the Board. The company is still headquartered in Ossian, Iowa. Clair had a significant amount of experience operating construction equipment when he started the company. He had worked for construction companies such as E.M. Duesenberg in Clear Lake, Anderson and Donahue in Des Moines, and Shirley Construction in Omaha. His first machine was a Caterpillar 35 gas bulldozer, which he used to grade driveways for many farmers in the Ossian area.

In 1949, the company continued to grow. Reilly purchased an Allis Chalmers HD-5 front-end loader and its first dump truck. Also during that year, Reilly Construction moved into the arena of public contract work. The company was successful in being the low bidder working as a subcontractor for Kehe Construction, a bridge contractor, in Waverly, Iowa. The project was located west of New Hampton and consisted of grading and channel-change work. From that point on, Reilly Construction grew rapidly. By 1954, just seven years after it’s founding, the company had projects all over the state and helped develop the present Interstate system across Iowa. 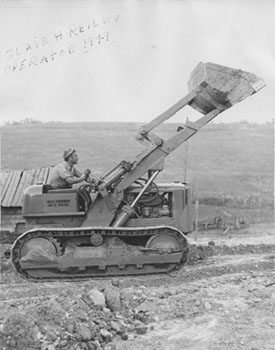 “Reilly Construction has always been a family-oriented business. In fact, during the first year of operation, at the ripe age of 11, I began my own indoctrination into the world of construction,” said Reilly. “I started to learn the construction industry by riding with my father and helping with various duties. As soon as I was old enough, I began operating equipment on my own – a job I performed for the company until roughly 1957.” At that time, he became a job superintendent. In 1960 the decision was made to turn the management of Reilly Construction’s day-to-day operations over to Bob. Clair continued to steer the company as president until 1982 and served as Chairman of the Board until the time of his death in 1999.

“We are proud of the people who work here. The company motto say's it all 'Our Employees Make the Earth Move' " said Reilly.

The company has worked on projects all over Iowa and the surrounding states. Reilly has also worked in Nevada, Indiana, Pennsylvania, Oklahoma and Texas.